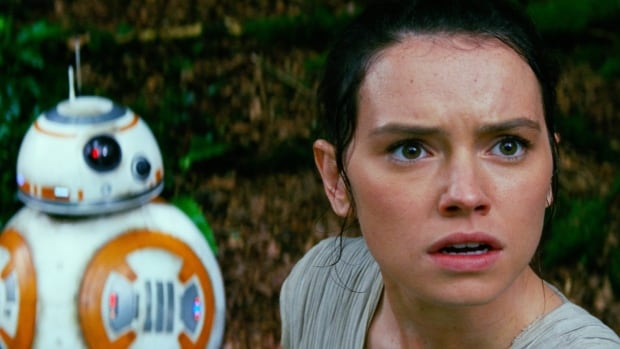 Star Wars: The Force Awakens has already surpassed $100 million US in North America and $250 million globally, setting it up for a record-breaking weekend.
The Walt Disney Co. on Saturday said the film made an estimated $120.5 million from Thursday night previews and opening day Friday. That smashes the previous opening day record of $91.1 million, set by 2011’s Harry Potter and the Deathly Hallows, Part 2. Studios count Thursday night grosses as part of opening day.
Disney is projecting a domestic weekend total of around $220 million, which would surpass the record $208.8 million of Jurassic World. It’s a type of release never before seen in December, where the previous top opening was 2012’s The Hobbit: An Unexpected Journey with $84.6 million.
The latest Star Wars is playing in 4,134 North American theaters, the widest December release ever.
But The Force Awakens is riding a wave of hype, nostalgia and positive reviews from critics and fans alike. J.J. Abrams’ seventh chapter in George Lucas’ saga has earned an A CinemaScore from moviegoers who have flooded theatres nationwide. Some $100 million in advance tickets were sold for the movie’s Thursday night debut.
Since beginning its overseas rollout Wednesday, The Force Awakens has made an estimated $129.5 million internationally.
Jurassic World, an unexpected sensation in June, also holds the global weekend opening record with $524.9 million, a number The Force Awakens could well exceed.
originally post by cbc.ca – writer Jake Coyle, The Associated Press Posted: Dec 20, 2015 10:41 AM ET Last Updated: Dec 20, 2015 10:41 AM ET
__________________________________________
Cheers
iamwill

Return of the Jedi? Actor confirms he has been approached to play farm hand turned Jedi knight in new Star Wars films planned by Disney Andrew Pulver The Guardian, Thursday 21 February 2013 20.01 GMT A long time ago in a galaxy far, far away, Mark Hamill was plucked from obscurity to play the lead in one of…

‘5D’ discs can store data until well after the sun burns out originally posted at engadget.com by Andrew Tarantola Great link sent via Leonard Lyn on Google + Researchers at the University of Southampton’s Optical Research Center announced on Tuesday that they’ve perfected a technique that can record data in 5 dimensions and keep it safe…

From Be Cool. Your browser does not support the video tag

For those celebrating, Happy Easter! If you are following the Julian calendar, Orthodox Christian Easter is today! Blessings, of health, happiness and good fortune to all. Cheers Will