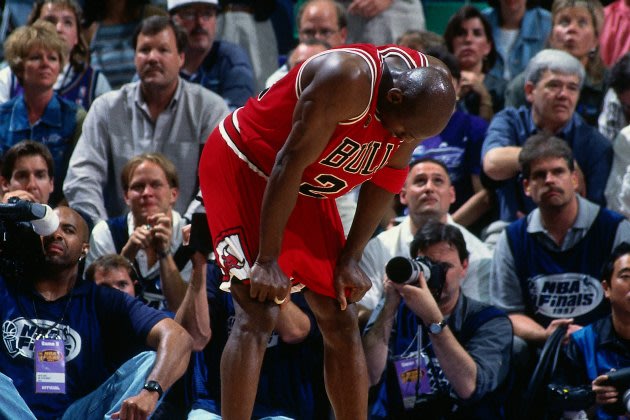 Michael Jordan regrets ordering pepperoni during the Flu Game (Dick Raphael/ Getty).
Of the many stories and events that add up to Michael Jordan’s legend, few loom as large as the “Flu Game.” In Game 5 of the 1997 NBA Finals, with his Chicago Bulls facing a 3-2 deficit against the Utah Jazz in Salt Lake City, Jordan scored 38 points despite playing with extreme nausea and discomfort. The Bulls took the game 90-88, the series returned to Chicago, and Jordan ensured that fans would discuss his will to win for decades.
After nearly 16 years, it’s still unclear if Jordan suffered from food poisoning or a stomach virus that night. Yet Tim Grover, Jordan’s longtime trainer, is pretty sure that MJ was poisoned. From an interview with Henry Abbott for TrueHoop:


We were in Park City, Utah, up in a hotel. Room service stopped at like nine o’clock. He got hungry and we really couldn’t find any other place to eat. So we said eh, the only thing I can find is a pizza place. So we says all right, order pizza.
We had been there for a while. Everybody knew what hotel. Park City was not many hotels back then. So everyone kind of knew where we were staying. So we order pizza.
Five guys came to deliver this pizza. I take the pizza and I tell them: “I’ve got a bad feeling about this. … I’ve just got a bad feeling about this.”
Out of everybody in the room, [MJ] was the only one who ate. Nobody else had it. And then 2 o’clock in the morning I get a call to my room. Come to the room. He’s curled up in the fetal position. We’re looking at him, finding the team physician at that time.
Immediately I told him it’s food poisoning. Not the flu.

Outside of the more sensational aspects of the story, it’s worth noting just how much NBA superstars’ routines have changed in the last 15 years. In 2013, a player at the top of his profession would never have to order out for pizza — he’d have a chef cook something up or tell a personal attendant to rush out to grab food to avoid precisely this kind of situation. Yet Jordan, legitimately one of the most famous people in the world, had to call up a random Park City pizza joint to find something eat. It’s hard to imagine.
Grover’s story is fairly believable, but his certainty could just be the product of his particular circumstance. If everyone in Park City really did know where the Bulls were staying, then it’s reasonable to assume that five people delivered the pizza because they all knew they might get the chance to meet Michael Jordan, an international superstar who typically doesn’t hang out with pizza deliverers. In fact, it’s likely that anyone who wished to poison a Bulls player would make sure not to raise suspicion by having an abnormal number of people deliver the pizza. Any change in standard procedure could reveal their plans.
That doesn’t mean that Grover is wrong, and his perspective certainly adds a new level of interest to the Flu Game. I’m just not sure it clarifies the essential mystery of the game. It’s another data point in a story that, by virtue of its sheer improbability and what it says about Jordan’s abilities, should be a part of NBA lore for as long as we follow the league.
Thank you ca.news.yahoo
by: Eric Freeman
___________________________________________________________
Cheers
Will