Watch Seth Meyers on his teacher!

If we asked you to name your favorite teacher, how long would it take you to think of her or him? If you’re like most of us, not that long. If we asked you to describe that teacher, would you be able to? Probably in great detail, and with lots of your favorite memories throne in. That’s because our teachers impact us far more than anyone else on the planet, excluding our parents. Listening to Seth Meyers’s tribute to his own favorite teacher is going to inspire you to look up yours and write a quick thank you email. 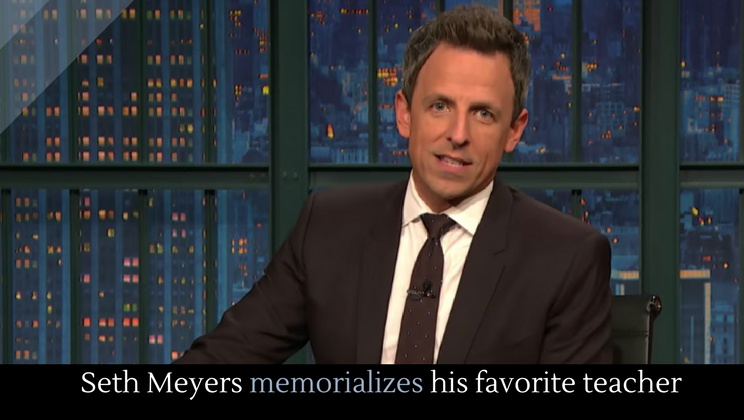 From Wikipedia
Seth Adam Meyers (born December 28, 1973)[1] is an American comedian, writer, political commentator, actor, and television host. He hosts Late Night with Seth Meyers, a late-night talk show that airs on NBC. Prior to that, he was a head writer for NBC’s Saturday Night Live (2001–2014) and hosted the show’s news parody segment, Weekend Update.
Meyers appeared in the film Journey to the Center of the Earth in 2008, hosted the 66th Primetime Emmy Awards in 2014 and voiced the character Jeremy “Prock” Awesome in The Awesomes (2013–2015). In 2018, Meyers hosted the 75th Golden Globe Awards.

The world’s biggest beer deal. Budweiser owner Anheuser-Busch InBev has raised its takeover offer for its rival brewer SABMiller to $66.85 a share, valuing the company at around $103.5 billion. ________ originally posted at buisnessinsider.com by Oscar Williams-Grut ________ AB InBev, the world’s biggest brewer, made the improved offer after an earlier offer of $64.77 a…

Happy lost the HAT, trades it in for a tux!

From stripper to White House hero! How do I get a ride on the American Dream ?! I don’t have a taxi, but I gonna get one… Rock on!!!

Buzzy Cohen Might Be The Most Polarizing ‘Jeopardy!’ Contestant Yet Is Buzzy the Best or worst to ever play the game?  Sharing Video from: Good Morning America. The buzz is building over one of the most divisive characters to ever play “Jeopardy!” Buzzy Cohen, a music executive from Los Angeles, has won eight days in…