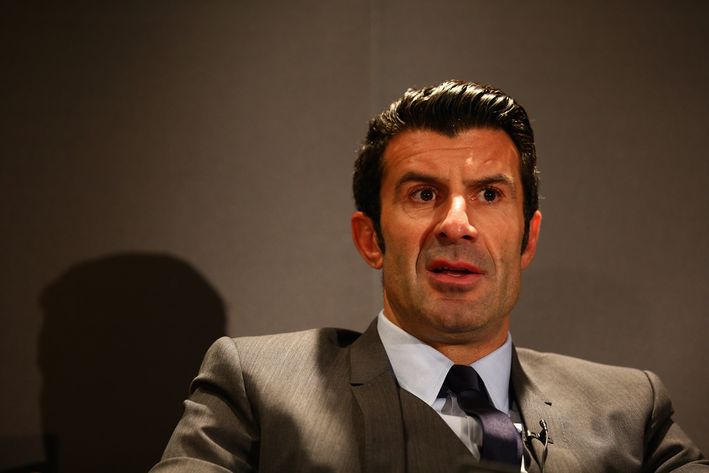 Paul Gilham/Getty Images
Luis Figo, candidate for the FIFA presidency, has suggested expanding the World Cup to a whopping 48 teams. We take a look at what that might mean.
 TWEET (24) SHARE (15) PIN

So, now we know what Luis Figo has been thinking about between takes on the set of these hair colour adverts. Today he announced his plans to shake up world football in the event of a TEAM FIGO victory in the upcoming FIFA presidential election — details here — and there was one proposal that really caught the eye:

Which sounds, when you write it down and make the font excitingly large, completely unthinkable. But then, we’re talking 2026 at the earliest, and if history’s any guide then expansion might well be inevitable. After all, the tournament has been swelling ever since it was conceived: 13 teams turned up for the inaugural tournament in 1930, since when it’s grown through 16 and 24 until France 1998, the first to be contested by 32 nations.

So what would a 48-team tournament look like? Figo’s vision involves two simultaneous groups stages of 24 teams, each held on a different continent, with the qualifiers coming together for the knockout stages in a third location. He’s said that the extra teams will come from outside Europe, though we have our doubts as to whether UEFA are going to happily allow such an expansion to pass by without them nabbing at least a couple of spots.

Anyway, for the sake of this hypothetical tournament, we’ve kept the ratios largely as they were at the last tournament. The only exception is giving Oceania two spaces at the expense of South America. Sorry, Venezuela and Paraguay, but there’s only 10 of you down there, and it would be silly to have nine of you qualifying.

So, anyway, here are the teams, chosen according to the FIFA rankings at this very moment:

Interestingly, of the 48 teams, only four — New Caledonia, Uzbekistan, Panama and Guinea — are making their World Cup debuts. Everybody else has had a tilt at the thing at least once, and New Zealand even managed to embarrass the holders last time around.

Here’s how they shake down into groups (again, done according to the rankings, because life’s too short to try to keep the federations apart at this stage): 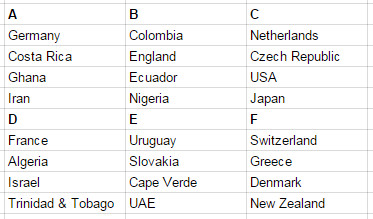 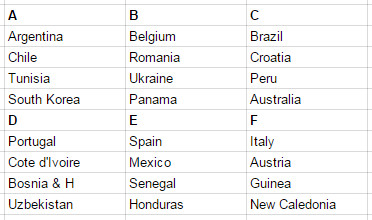 Some pretty tasty groups in there, and some tempting matchups. Some pretty untasty ones as well, admittedly, but that’s only to be expected. It’s not like the current format is averse to serving up the odd Group of Meh. Of course, the real value of any group depends on how many teams qualify out of it, and it’s here that the possibility of a 48-team World Cup becomes really interesting.

The last 24-team tournament, USA 1994, sent sixteen teams through to the knockout stages: the group winner, the group runner-up, and the four best third-placed teams. This allowed the tournament to have an extra knockout round before the quarter-finals, but did mean that the group stages ended with the elimination of just eight teams. Here, it would mean that 16 of 48 went home early, a reduction of just a third.

However. If World Cup One and World Cup Two each send just eight teams through — six group winners, plus the best two runners up — then that keeps the knockout stage at the same size as it is now. It would also have the effect of making things a lot sharper in the groups: taking the draw above, if just one of England/Colombia, Argentina/Chile, Portugal/Cote d’Ivoire, Spain/Mexico were guaranteed to progress, everything gets sharper in the groups.

Additionally, the breaking of the the eight-group, first- and second-place qualifying principle raises the tempting thought that the last 16 could be determined by an open draw, FA Cup style. We did a trial run with the groups above, assuming the highest ranked teams progressed, and ended up with Romania vs. Portugal and Belgium vs. Switzerland. But also Spain vs. France, Colombia vs. Chile, Brazil vs. Germany … well, you get the idea. A bit more chaos could mean a bit more fun.

Of course, the knock-on effect of that would be that 32 teams of the competing 48 would be going home early: if one third feels too few, then two thirds feels like an awful lot. And you suspect that the teams in the last sixteen would be fairly predictable bunch. If this is a plan to get more countries involved, it might be best not to send them all home after a fortnight.

The other obvious problem, beyond the logistics, is the length. There are those who argue, not unconvincingly, that the tournament as a spectacle has never really recovered from expanding beyond 16 teams. Here, if just the 16 best go through to the knockout stages, then we’re looking at an 88-game tournament; if we introduce a round of 32, then we’re looking at a thumping 104 games. Never mind bigger wallcharts. We’re going to need bigger walls.

We’ll need more time as well. Brazil 2014 lasted exactly a month, and that was without teams having to change continent halfway through; add that plus an extra round into the mix, and we’re looking at at least six weeks. You have to wonder what that might do to the fitness of the footballers involved, and so to the quality of the football in both the tournament and the following season. Six weeks is also a lot to ask of the travelling fans and the viewing public, not to mention the television networks, broadcasters and journalists.

There is, too, a mountain — perhaps an insurmountable one — of logistical, financial and political issues involved in the move from one host to two or three. Though each host would have fewer games, there still remains the possibility that all three might have to make expensive, unprofitable infrastructure upgrades, that World Cup white elephants might ended sprinkled across three continents rather than one. And if the Qatar/Russiafarrago is what happens when FIFA permits bidding for two tournaments at once, who knows what might happen when they try and hold a vote for three.

But then, as noted above, it’s in the nature of the World Cup to get bigger. FIFA’s own website boasts that its membership grew by more than 60 between 1975 and 2002, and every match is another opportunity for the sponsors to get their names on television, and another card for FIFA to take to the negotiating table with those same sponsors. Figo is vanishingly unlikely to win the upcoming election, but you can bet that whoever winsSepp Blatter has also had thoughts in this direction. And his decision, you suspect, will be made purely on the strength of the bottom line.

(We simulated the entire tournament, by the way, and England won. We were as surprised as you.)