Raptors “Air” Dance Pack!
This is the BEST time-out entertainment ever – LOL

“We The North” re-branding” 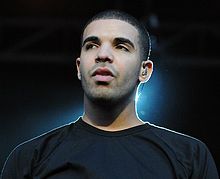 Toronto-based hip-hop musician Drake was named as the Raptors’ “global ambassador” in September 2013.

In the lead-up to the team’s 20th anniversary season in 2015, and its hosting of the 2016 All-Star Game, the Raptors began the process of re-branding itself. On September 30, 2013, Toronto-based rapper Drake was announced as the new “global ambassador” for the Toronto Raptors, thereby joining the executive committee of his hometown’s NBA team.[161] In April 2014, the Raptors unveiled a new imaging campaign developed by the agency Sid Lee, “We The North”, built around a manifesto that was meant to embrace the team’s trait of being an “outsider” from the “north side”, and the accompanying feelings of players and fans.[162]
The “We The North” campaign was originally to be launched during the 2015-16 season; however, the launch was hastened so it would be ready in time for the 2014 playoffs, taking into account the poor performance of Canada’s other pro sports teams at the time. An introductory commercial was quickly filmed, which featured the manifesto as narration, scenes of local basketball players in various outdoor locations around the city, and ended with a scene displaying a black, waving flag with the motto written on it. The campaign was immediately embraced by fans during the playoffs and following season; the launch commercial was viewed over 500,000 times in the two days following its release, “We The North”-branded shirts and flags became a common sight at games, while Ryerson University sports marketing professor Cheri Bradish compared the campaign to Molson’s former “I Am Canadian” alcohol advertising campaign in how it resonated with the country.[162][163]
On December 19, 2014, the Raptors soft-launched a new logo also designed by Sid Lee, which features a basketball with claw marks. The new logo will be officially implemented for the 2015-16 season.[164] The logo’s introduction was marred by a disorganized launch, which saw a black and white version initially shown before the eventual unveiling of colored versions later in the day, mixed reviews for the design itself, with some (especially on the black and white version) comparing it to that of the Brooklyn Nets, and despite teasing merchandise with the new logo, not releasing any until at least mid-2015.[165] There were also alleged tensions between MLSE staff and Drake surrounding the new design—in particular, the performer had pushed for the team to change its primary colour from red to gold (a colour seen in one of the official variants of the logo unveiled that day). In a response on Twitter, Drake distanced himself from the “execution” of the new logo.[166]