Originally posted at macrumors.com
Friday November 7, 2014 2:30 pm PST by Kelly Hodgkins
As forecasted, the third calendar quarter of 2014 was a stellar quarter for Mac shipments, with Apple gaining ground on its competitors in the US. According to IDC’s quarterly PC tracker (via Re/code), Apple reached its highest PC market share ever reported, a metric that accounts only for Mac shipments and does not include the iPad.
The company gained ground with 13.4 percent of the US PC market, edging out Lenovo (10.7 percent) to grab the number three spot behind HP (27.7 percent) and Dell (24 percent). Shipments in the US climbed to more than 2.26 million in the third calendar quarter of 2014. 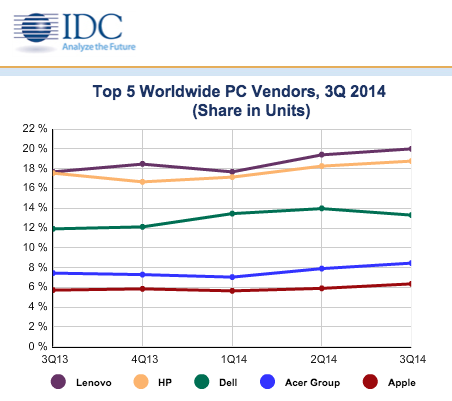 Globally, Apple’s market share climbed 5.7 percent year over year, with the company selling a record-breaking 5.5 million units in the just ending quarter. Apple now sits in the number five spot when it comes to global PC shipments, behind Lenovo, HP, Dell and Acer.
Apple refreshed its MacBook Air and Retina MacBook Pro earlier this year with updated processors and other minor improvements. The company also dropped prices on some models and heavily promoted the desktops during the back-to-school season with a $100 gift card along with a discounted purchase price for both students and educators.
Next year may see even stronger Mac sales as Apple prepares to update its Mac lineup with Intel’s Broadwell processors. A 12-inch MacBook with an ultra thin chassis, a Retina display, and an Intel Core M chip may be one of the first Broadwell machines to ship in the new year.