Skip to content
Roger Ebert was a man with very strong opinions, but that doesn’t mean he was a bad guy. In a panel held Sunday at the Tribeca Film Festival in New York, Ben Stiller revealed that the late film critic apologized to him for an especially negative review he wrote in 2001.
On September 28, 2001, just over two weeks after the 9/11 attacks, Ebert reviewed “Zoolander,” a comedy that Stiller wrote, directed, and starred in, about a self-absorbed, dim-witted male fashion model. Ebert’s pan was unrelenting. Giving the film just one star, he began by writing:
“There have been articles lately asking why the United States is so hated in some parts of the world. As this week’s Exhibit A from Hollywood, I offer ‘Zoolander,’ a comedy about a plot to assassinate the prime minister of Malaysia because of his opposition to child labor. You might want to read that sentence twice.” 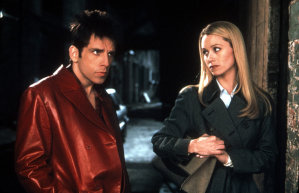 ‘Zoolander’ (Photo: Everertt Collection)Ebert went on to say, “If the Malaysians made a comedy about the assassination of the president of the United States because of his opposition to slavery, it would seem approximately as funny to us as ‘Zoolander’ would seem to them.”
Stiller, as one might expect, wasn’t happy with the review, and at the Tribeca panel, he said with a laugh, “It seemed rather harsh to me.” But that wasn’t the end of the story.
“To his credit, I ran into him [Ebert] like five or six years later backstage at ‘The Tonight Show,'” Stiller recalled. “He said, ‘Hey, I just want to apologize to you. I wrote that about ‘Zoolander,’ and I [now] think it’s really funny. Everything was a little crazy [back then]. It was Sept. 11 and I went overboard.’ I said, ‘Thanks for telling me backstage at ‘The Tonight Show.'” Stiller went on to say he was saddened by Ebert’s recent passing.
Stiller also mentioned he tends not to read his reviews. “It’s the old adage: if you believe the good ones, you have to believe the bad ones,” Stiller said. “I know people who like reading reviews, but, for me, you can always feel what’s getting good reviews or bad reviews. People will let you know. For me, that metric is one you can’t get wrapped up in. What do you do if they don’t like you? I guess you can learn from them.”
Stiller has a sequel to “Zoolander” in the works, and deep down inside, he may very well be relieved that Ebert is no longer in a position to critique the followup.
Thank you movies.yahoo.com (by Mark Deming )
______________________________
Cheers
Will