Danish toymeister Lego has unveiled the largest model yet using its eponymous plastic chunks: a 43ft (13.1 meters) X-wing fighter that’s a claimed 1:1 scale replica of George Lucas’ Death Star destroyer, and is 42 times the size of the same kit that Lego offers to children (old and young). 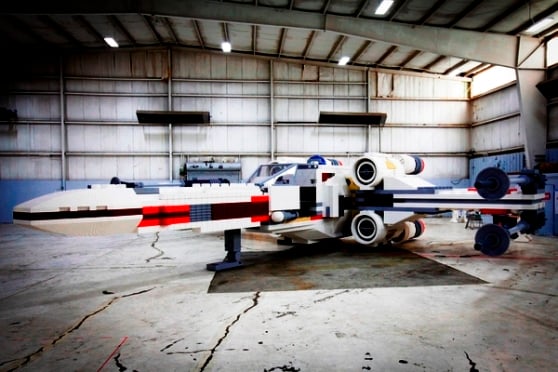 A Lego droid is also included

The X-wing is constructed of 5,335,200 bricks, has a wingspan of 44ft (13.44m), stands 11ft (3.35m) tall, and weighs 45,980lb (20,865kg). It was built by 32 exceptionally patient staffers in the Czech Republic over a period of about four months, and was unveiled in New York City’s Times Square on Thursday.
“Our LEGO Master Builders are always testing their creative skills to top their last larger-than-life sized creations,” said Michael McNally, brand relations director for LEGO Systems. “The size and structural complexity of a freestanding model 42 times the size of one our retail sets was a challenge they could not resist.”
There are, however, other reasons for the modelers to practice their art. The X-wing will in due course appear at the company’s LEGOLAND Resort in Carlsbad, California (after being certified as strong enough under the state’s seismic requirements), and is being displayed in Times Square to publicize the forthcoming “Yoda Chronicles” on Disney’s Cartoon Network.
The television show will use stop-motion Lego characters from the Star Wars canon (and a new character, Jek 14 – a clone enhanced by the Force) in a three-part comedy/action series to air later this year.
“We are fortunate to work with Lucasfilm to build new stories, characters and vehicles through one-of-a-kind content such as the new ‘Yoda Chronicles’ miniseries,” said Nicholas Hort, LEGO Star Wars brand manager.
For those of you who want their own Lego X-wing model, albeit on a much smaller scale, you can now buy one for an eye-watering $200. The Danes will throw in a display stand and technical specification sheet, but back when this hack was buying LEGO, that kind of money would have bought a bathtub-full of the li’l blocks. ®
Thank you theregister.co.uk (Posted in Bootnotes, 25th May 2013 01:23 GMT)
By Iain Thomson in San Francisco
_______________________________________
Cheers
Will