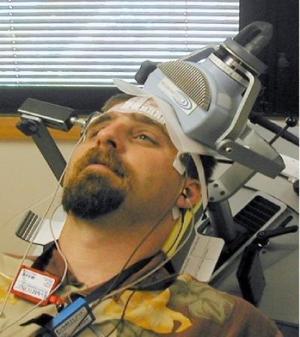 MUSC nurse Berry Anderson demonstrates transcranial magnetic stimulation Scientists from the Medical University of South Carolina are reporting that they have successfully removed cigarette cravings in smokers using a method known as ‘transcranial magnetic stimulation’ or TMS.
The researchers recruited a group of smokers, asked them not to smoke for 2 hours before the experiment, and then, without telling them which group they were in, gave one group a real 15-minute treatment of the transcranial magnetic stimulation and another group a real-looking but bogus treatment.
The effect was only temporary, but the volunteers that had the real TMS treatment had their cravings for cigarettes suppressed. Furthermore, the volunteers that smoked the most saw the biggest effect.
TMS, which uses magnetic fields to stimulate parts of the brain, has already been tested in treating depression, attention deficit disorder, migraines, stroke, Parkinson’s disease and schizophrenia.
The researchers say that it will take further research to tell if repeated TMS sessions for smokers would see lasting effects on their cigarette cravings.
There’s still questions about TMS’s effectiveness as a treatment, so it may not be a miracle cure, but with the long list of side-effects that seem to accompany any drug treatment for illnesses and disorders these days, it’s easy to wonder if medicine has been too firmly focused on the ‘chemical’ part of our electro-chemical biology.
(Photo courtesy: Mark George, M.D., Medical University of South Carolina)
Thank you ca.news.yahoo.com
__________________________________________
I witnessed a process like this take place on a friend. To the best of my knowledge, he hasn’t smoked in 3 years, nor has he grown a third ear! 🙂
Cheers
Will