Return of the Jedi? 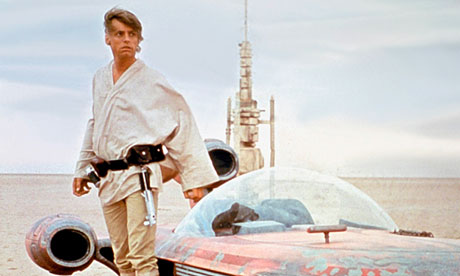 A long time ago in a galaxy far, far away, Mark Hamill was plucked from obscurity to play the lead in one of the most popular film franchises of all time. Now the actor looks set to wield his lightsabre once again, after confirming that he is set to have talks to reprise his role as Luke Skywalker in the series of films planned by Disney, the new owner of theStar Wars universe.
Hamill, 61, played the farmhand turned Jedi knight in the first three Star Wars films to be released, between 1977 and 1983.
In comments that will doubtless whet the appetites of the films’ legions of fans, the actor told the ET Online website: “They’re talking to us. George [Lucas] wanted to know whether we’d be interested. He did say that if we didn’t want to do it, they wouldn’t cast another actor in our parts – they would write us out.”
The confirmation that he may appear in the series follows widespread rumours that Harrison Ford, now 70, who played gunslinger Han Solo, was also in negotiations to appear in the new series. Hamill’s use of the word “we” implies that the talks could include others from the original films’ cast, which also included Carrie Fisher, 56, who played Princess Leia.
The fevered swirl of rumour surrounding who may or may not be appearing in any new Star Wars film has been running since October, when Disney bought Lucasfilm for $4.05bn (£2.6bn) and announced plans to release a seventh Star Wars film in 2015, as well as a new one every two or three years after that.
It might be uncharitable to suggest that Hamill’s readiness to participate in the new series is because his career has not exactly flourished after Star Wars, being best known since for voicing superhero cartoons for TV – in contrast to Ford, who went on to star in films including the Indiana Jones series, Blade Runner and Witness, and is now rated as the fourth highest grossing actor of all time. Fisher, who has had well-publicised battles with addiction, has continued to act but also became a successful author, with the book Postcards from the Edge made into a film.
Hamill said he would be keen for the entire cast to be reunited. “I said to George that I wanted to go back to the way it was, in the sense that ours was much more carefree and lighthearted and humorous – in my opinion, anyway,” he told ET Online, a sentiment doubtless shared by much of the fanbase. “And another thing I’d want to make sure of is: are we going to have the whole gang back? Are Carrie and Harrison and Billy Dee [Williams, who played Lando Calrissian] and Tony Daniels [who played C3PO], everybody that’s around from the original [returning]? I want to make sure everybody’s on board here, rather than just one.”
It has been suggested that not only does Disney plan to extend the Star Wars series itself (the most recent sixth film, Revenge of the Sith, was released in 2005), but that standalone films featuring other key characters – Yoda, Boba Fett or Jabba the Hutt – could also go into production.
Fans have high hopes for the new set of films, with JJ Abrams hired to direct the seventh in the series. The franchise was widely regarded as floundering creatively in Lucas’s hands, and the second trilogy attracted increasing levels of vitriol. The Disney purchase, however, has led to more confidence in the future, with the hiring of Abrams considered a particularly astute move after his successful reinvention of the Star Trek franchise.
Star Wars remains a phenomenal business operation: the price of the Lucasfilm buyout accurately reflects the box office income the series has so far generated. The 14 major releases since 1977 – including reissues, three special editions, a 3D version of The Phantom Menace and the Clone Wars animated film – has resulted in a worldwide income of over $4.5bn – although billions more have been earned from merchandising and DVDs.
Lucas’s commercial acumen has become apparent in a number of ways, to the claimed detriment of his cast. David Prowse, the original Darth Vader, claimed in 2009 he had been told that the $475m-grossing Return of the Jedi never made a profit, and therefore he was not entitled to “residuals”, the fees due to performers for repeat showings.
Hamill said he had no idea where the proposed new trilogy of films might take the story. But he imagined himself as an older Jedi master providing guidance to a younger generation.
“I’m assuming, because I haven’t talked to the writers, that these movies would be about our offspring – like my character would be sort of in the Obi-Wan range [as] an influential character,” he said. “When I found out [while making the original trilogy] that ultimate good news/bad news joke – the good news is there’s a real attractive, hot girl in the universe; the bad news is she’s your sister – I thought, ‘Well, I’m going to wind up like Sir Alec [Guinness]. I’m going to be a lonely old hermit living out in some kind of desert igloo with a couple of robots.'”

When Star Wars (later to become “Episode IV: A New Hope”) was released in May 1977, its creator George Lucas couldn’t have imagined what a monster it would become.
The original film earned nearly $800m worldwide and, adjusted for inflation, it is still the third highest grossing film ever. Along with Steven Spielberg’s Jaws, it created the concept we now know as the summer blockbuster.
The ‘prequel’ trilogy, featuring Anakin Skywalker’s fall to the dark side and the much-maligned Jar Jar Binks, was released between 1999 and 2005 but Lucas has developed the franchise far beyond those six original films.
Hardcore Star Wars fans are familiar with the ‘Expanded Universe’ – in effect, Star Wars plots and characters that have developed outside the films. In the early 1990s, Dark Horse published popular Star Wars comics under the Dark Empire banner, and sci-fi author Timothy Zahn wrote three novels – the Heir to the Empire trilogy – that sold 15m copies.
Sales of games and toys have made up the bulk of Star Wars revenue over the past three decades. There have been over 70 official computer games, ranging from space shoot-em-ups like Rogue Squadron to the family-friendly adventure Lego Star Wars.
Thank you gaurdian.co.uk
_______________________________________
Help me obi wan kenobi,… your my only hope!
Cheers
Will