Coffee Cups in a Row

The Turkish method of coffee preparation, shown in steps

Turkish coffee is a method of preparation, not a kind of coffee. Therefore, there is no special type of bean. Beans for Turkish coffee are ground or pounded to the finest possible powder; finer than for any other way of preparation. The grinding is done either by pounding in a mortar (the original method) or using a burr mill. Most domestic coffee mills are unable to grind finely enough; traditional Turkish hand grinders are an exception.
As with any other sort of coffee, the best Turkish coffee is made from freshly roasted beans ground just before brewing. Turkish-ground coffee can be bought and stored as any other type, although it loses flavour with time.
While there are variations in detail, preparation of Turkish coffee consists of immersing the coffee grounds in water or milk[citation needed] which is usually hot, but not boiling, for long enough to dissolve the flavoursome compounds. While prolonged boiling of coffee gives it an unpleasant “cooked” or “burnt” taste, very brief boiling does not and shows without guesswork that it has reached the appropriate temperature.
The amount of cold water necessary can be measured in the number of demitasse cups desired (approximately 3 ounces or 90 ml) with between one and two heaped teaspoons of coffee being used per cup. The coffee and sugar are usually added to the water rather than being put into the pot first.
In Turkey, four degrees of sweetness are used. The Turkish terms and approximate amounts are as follows:

In the Arab World “sāda” (سادة plain; no sugar, meaning “black” in Arabic) or “murra” (مرة bitter; no sugar) is common.
The coffee and the desired amount of sugar are stirred until all coffee sinks and the sugar is dissolved. Following this, the spoon is removed and the pot is put on moderate heat; if too high, the coffee comes to the boil too quickly, without time to extract the flavour. No stirring is done beyond this point, as it would dissolve the foam.
Just as the coffee comes to the boil, the pot is removed from the heat. It is usually kept off the heat for a short time, then brought to boil a second and a third time, then the coffee is poured into the cups.
Getting the thickest possible layer of foam is considered the peak of the coffee maker’s art. One way to maximise this is to pour slowly and try to lift the pot higher and higher as the pouring continues. Regardless of these techniques, getting the same amount of foam into all cups is hard to achieve, and the cup with the most foam is considered the best of the lot. 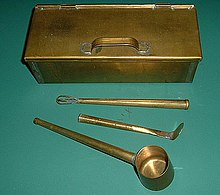 A well-prepared Turkish coffee has a thick foam at the top (köpük in Turkish), is homogeneous, and does not contain noticeable particles in the foam or the liquid. It is possible to wait an additional twenty seconds past boiling to extract a little more flavour, but the foam is completely lost. To overcome this, foam can be removed and put into cups earlier and the rest can be left to boil. In this case special attention must be paid to transfer only the foam and not the suspended particles.