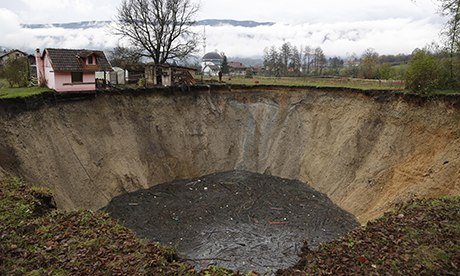 A sinkhole has swallowed a village pond that had been lined with willow and plum tree. Photograph: Amel Emric/AP
Just outside the village, children fished in a tranquil pond bobbing with green algae and lined with willow trees, as cattle grazed nearby.
Now, Rezak Motanic gazes in disbelief down a gigantic crater where the pond used to be. It’s like something from a science fiction movie: a sinkhole swallowed the water, the fish and even nearby trees.
“I sat here only a day before it happened, sipping plum brandy,” Cemal Hasan said. “And then, there was panic. Fish were jumping out, and a big plum tree was pulled down like someone yanked it with a hook.”
Residents of this remote north-western Bosnian village have been in shock since the pond vanished two weeks ago.
The pond was about 20 metres in diameter and about eight metres deep. Now, the “abyss”, as the villagers have dubbed the crater, is some 50 metres wide and 30 metres deep – and growing.
Scientists say it is not uncommon that ponds and small lakes suddenly disappear. They say it could be caused by drying underground water currents, or changes in soil drainage due to irrigation.
Sanica villagers, however, are having none of the scientific explanations.
“It could have been a giant cave that opened its doors,” offered Milanko Skrbic. “Or a volcano.”
Another popular theory – one that experts dismiss along with the others proposed by townsfolk – is that fish could have triggered the explosion of one of several world war two German bombs believed to have been thrown into the pond by an old woman after the war.
“She herself died when one of the bombs exploded in her arms,” Cemal Hasan said as he stood on the edge of the “abyss.”
Another spooky explanation: the owner of the pond took it with him when he died about a month ago.
“Only days before Hasan passed away he said: ‘I’ll take everything with me when I die.’ And that’s what he did,” Motanic said. “His daughter saw him walk on the lake the night he died.”
Husein Nanic said it could be a sign that the end is nigh. “All sort of miracles happen before the doomsday,” he said.
Thank you thegaurdian.com
______________________________________
Cheers
Will