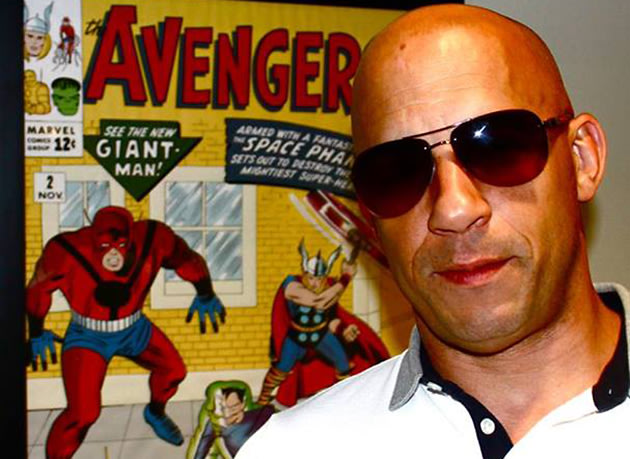 It’s hard to tell which character in the sprawling Marvel Universe might be the perfect fit for Vin Diesel. There are so many fast and furious heroes to go around … not to mention villains, too.

The “Riddick” star first teased his possible involvement with an upcoming Marvel project on June 26 with a post on his Facebook page that has since been removed (probably at the request of super-secretive Marvel execs):

“Marvel has requested a meeting … no idea what for … haha, you probably know better than me.”

We didn’t, but we were certainly intrigued. Diesel has now posted a tantalizing follow-up, which includes a pic of the star next to poster-sized cover art of a back issue of “The Avengers”:

“Marvel meeting today … Only the people in the room can tell you what was discussed … P.s. Thanks to Our page, for pushing to make it happen … you know I get tunnel vision with my work … and after that meeting today … wow!”

At this point it’s probably safe to assume that Vin Diesel will be joining the ever-growing cinematic Marvel Universe, joining an A-list collective cast that includes Robert Downey Jr., Chris Hemsworth, Chris Evans, Scarlett Johansson, Mark Ruffalo, Jeremy Renner and many more. So who might the man best known to audiences worldwide as street racer/mega-heist mastermind Dominic Toretto in the “Fast and Furious” series be playing?

We probably shouldn’t ignore the details of the pic that Diesel posted yesterday, as it features a character that might not seem very Diesel-esque at first glance but starts to become a little more Vin-like the more you think about it. The back issue of “The Avengers” on display urges readers to “See the new Giant-Man,” which is a sometimes-alias of size-shifting Dr. Hank Pym, otherwise known as Ant-Man … and “Shaun of the Dead” director Edgar Wright just so happens to be prepping a stand-alone “Ant-Man” movie for November 2015.

Vin Diesel as a brilliant scientist who develops a suit that allows him to shrink to the size of an insect … and, later, enlarge to the size of a giant? It’s so crazy, it just might work!
That is, if the artwork in the pic really means anything (admittedly, we might be reaching). There are several other possible contenders as well … 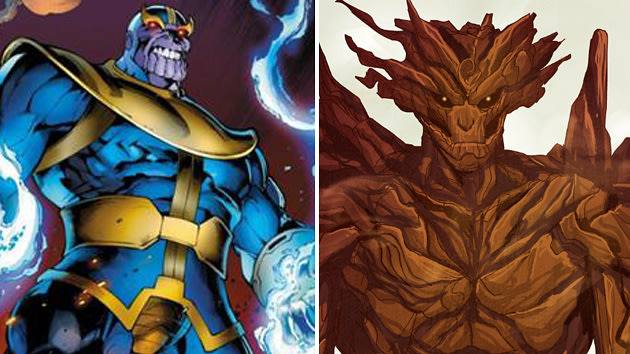 Would Vin Diesel be better as Thanos or Groot? Or someone else entirely? (Photo: Marvel)
Diesel’s larger-than-life persona (and body) would fit right in with the over-the-top theatrics (and characters) of “Guardians of the Galaxy,” the final Marvel Phase Two movie (August 1, 2014) before the “Avengers” sequel. Diesel could possibly be up for Thanos, the villain character teased at the end of “Marvel’s The Avengers” and who is rumored to be the big baddie in “Guardians.” He could also play Groot, the talking tree-thing, or even Rocket Raccoon, the trigger-happy, uh, raccoon.
Actually, let’s go back to that posted pic. Maybe the clue isn’t so much the image of Hank Pym but rather the issue of “The Avengers.” Could Diesel be appearing in “Marvel’s The Avengers 2”? We doubt he’s up for Quicksilver (a personal favorite of writer-director Joss Whedon), but maybe he’s up for an unnamed villain role in May 2015’s Marvel mash-up?

There are Marvel projects further down the pipeline that seem less likely to include Diesel. Rumor has it that Phase Three (the films that will be released post-“Avengers 2”) will include a “Doctor Strange” movie, and Diesel doesn’t exactly give off an “elitist stage magician” vibe. The title role in a possible “Black Panther” film is certainly a possibility as well. But again, Diesel who is “of ambiguous ethnicity” (his words) doesn’t quite seem like the top contender to play an African character from the fictional African nation of Wakanda.

Say, there’s going to be a Marvel panel at the San Diego Comic-Con on Saturday, July 20. Might an official announcement be imminent? Diesel will already be down there for “Riddick,” after all. We’ll be there to find out!