The Warriors drubbed the Memphis Grizzlies 125-104 to become the all-time winningest team for one season, besting the 1995-96 Chicago Bulls by one victory.

“It’s a great way to finish off what was an amazing regular season. I just told our guys I never in a million years would have guessed that record would ever be broken,” said Warriors head coach Steve Kerr, who played on the Bulls’ record-setting team.
Shooting guard Klay Thompson said the team played hard every contest.
“That’s hard to do for 82 games,” he said. “We’re going to enjoy this tonight, but we have a quick turnaround this weekend.”
The Warriors are now 16 victories away from more glory as they are set to defend their NBA title in this year’s playoffs. The top seed is theirs, assuring home-court advantage for the second year in a row.
“Congrats to the @Warriors, a great group of guys on and off the court. If somebody had to break the Bulls’ record, I’m glad it’s them,” President Barack Obama’s Twitter account said.
Stephen Curry led the Warriors with 46 points, 30 of which came on 3-pointers.
NBA Commissioner Adam Silver also congratulated the record-setters.
“The team held itself to a high standard throughout the season, playing with purpose every night and captivating fans around the world with its free-flowing style, spectacular shooting and flair for the dramatic. Kudos to the entire Warriors organization,” Silver said.

Stephen Curry: ‘You’ve got to go for it’

In an interview with CNN’s Andy Scholes earlier this season, Stephen Curry didn’t hide from it: The Warriors want this record.
“There’s not many opportunities that you probably have to go after that record,” Curry said at the time. “Obviously, going to win a championship, that’s the main goal. But there’s a reason that we’re still talking about that ’95-’96 Bulls team that was able to accomplish the 72-10 record. They were on a mission that year and ended up winning the championship as well. So that’s kind of where we want to be. 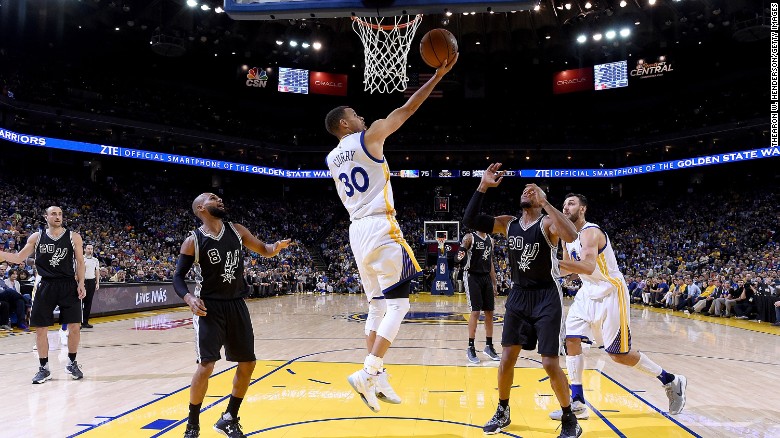 Curry, seen here April 7 against the Spurs at Oracle Arena in Oakland, California, leads the NBA in scoring with 29.9 points per game.
“But when you have a shot at history and being the best regular-season team in the history of the NBA, I think you’ve got to go for it.”
On Tuesday, Curry talked about staying in the present and slowing down to enjoy what’s going on now.
“We put so much energy and effort into today. Enjoy it,” Curry said. “Tomorrow’s not promised, obviously, so why cheat that experience?”

Michael Jordan: ‘Go get the record’